This piece is inspired by the king protea flower. As it will be seen later,I integrated weaving within the petals to create an interesting visual texture. My work can be viewed as personal adornment when worn on the body as well as a visual artefact when off the body. 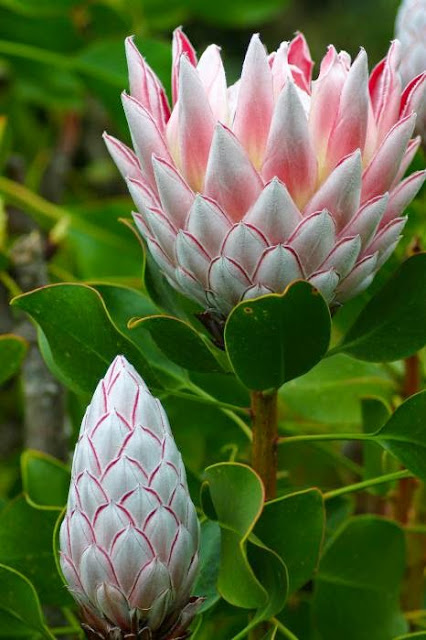 The way in which the petals overlap one another was what I found interesting. I wanted to incorporate that somehow. 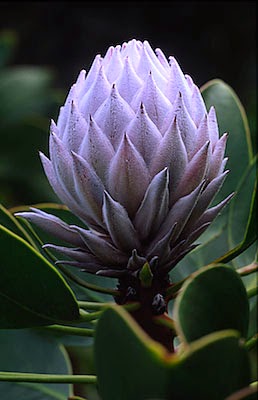 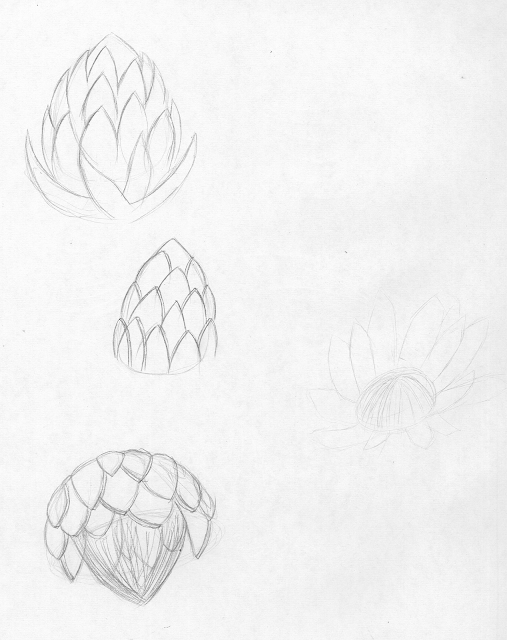 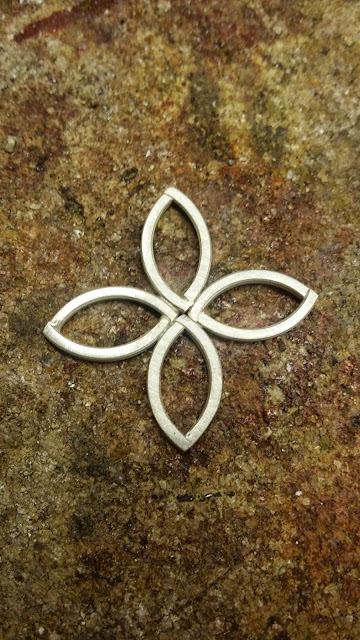 The frame of the petals are made of 1.5mm thick square silver wire. The four petals are soldered together at the ends. I made 2 sets of these. 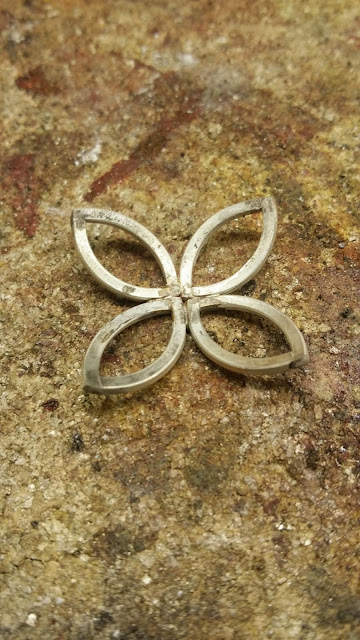 The petals are then domed. This is what it looks underneath. 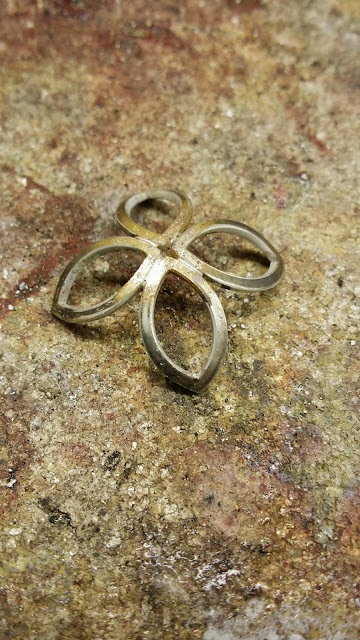 This is what the domed petals look like from the top. 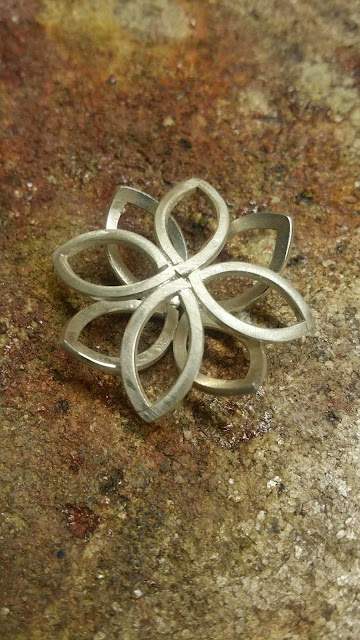 After having looked at various way of how the petals will be positioned on one another I decided on the position above. 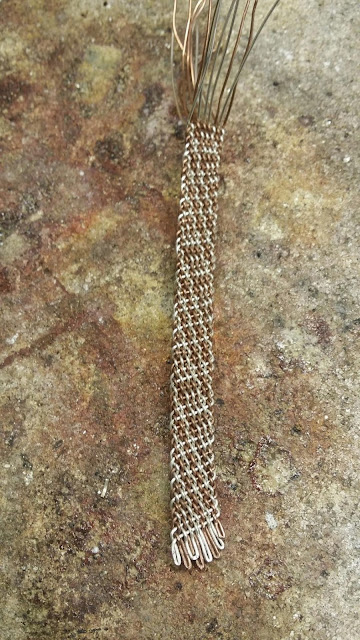 The weaving stitch I used is the "inhlandla" stitch. This is the stitch that I have used in the majority of my work. It is the neatest stitch and I achieve a tighter fit between wires. 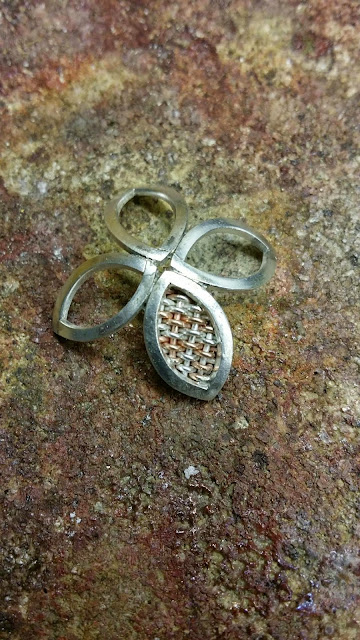 I sawed the woven strip into the shape of the inner petals and soldered them in place. 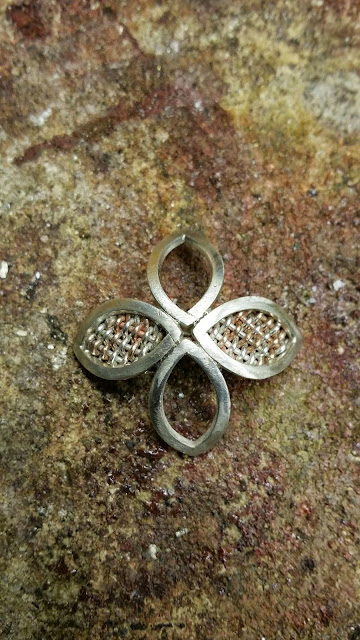 The second petal with the woven inner petal soldered in it. 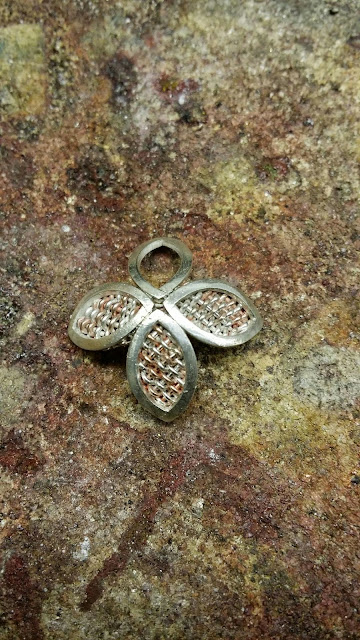 The third petal with the woven inner petal soldered in it. 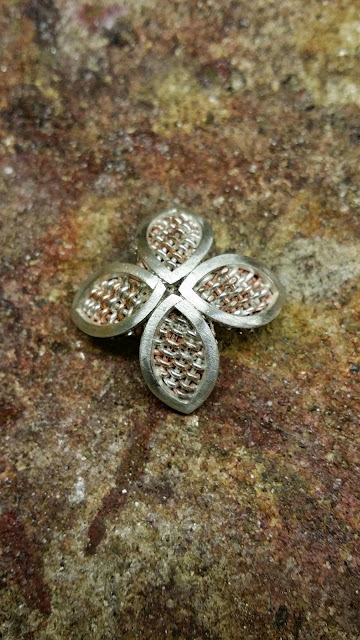 The fourth and final petal with the woven inner petal soldered in it. 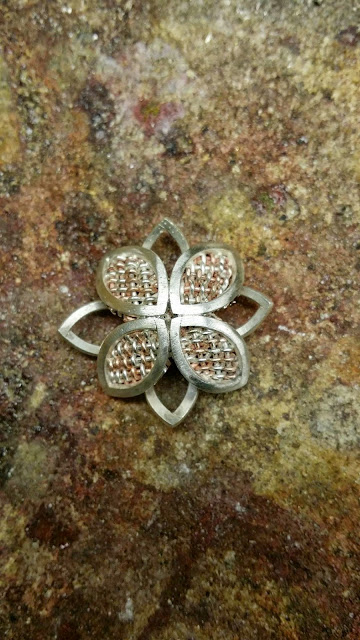 The top view of the petals in position. I thought of placing woven petals in the bottom silver petals like  I did with top but that would disrupt how the ring rests on the stand at the end. 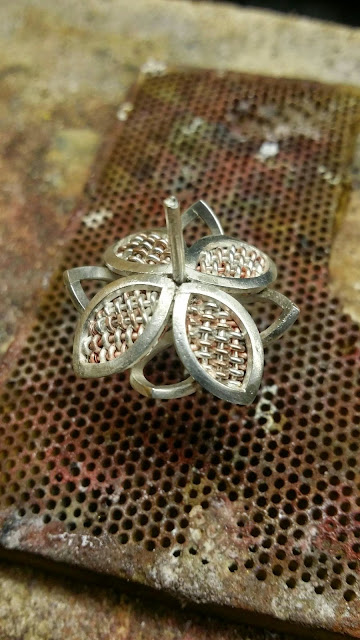 Instead of just soldering the petals to one another, I also inserted a 1mm thick wire rod in the middle of the petals. 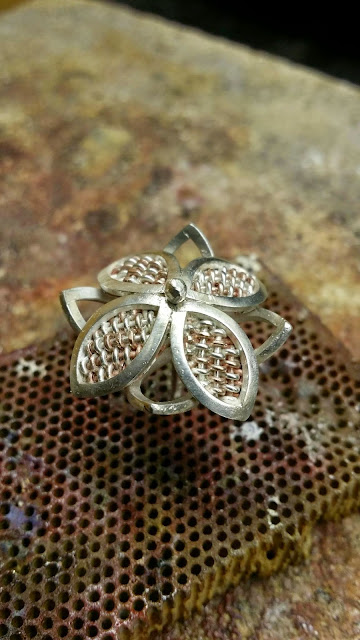 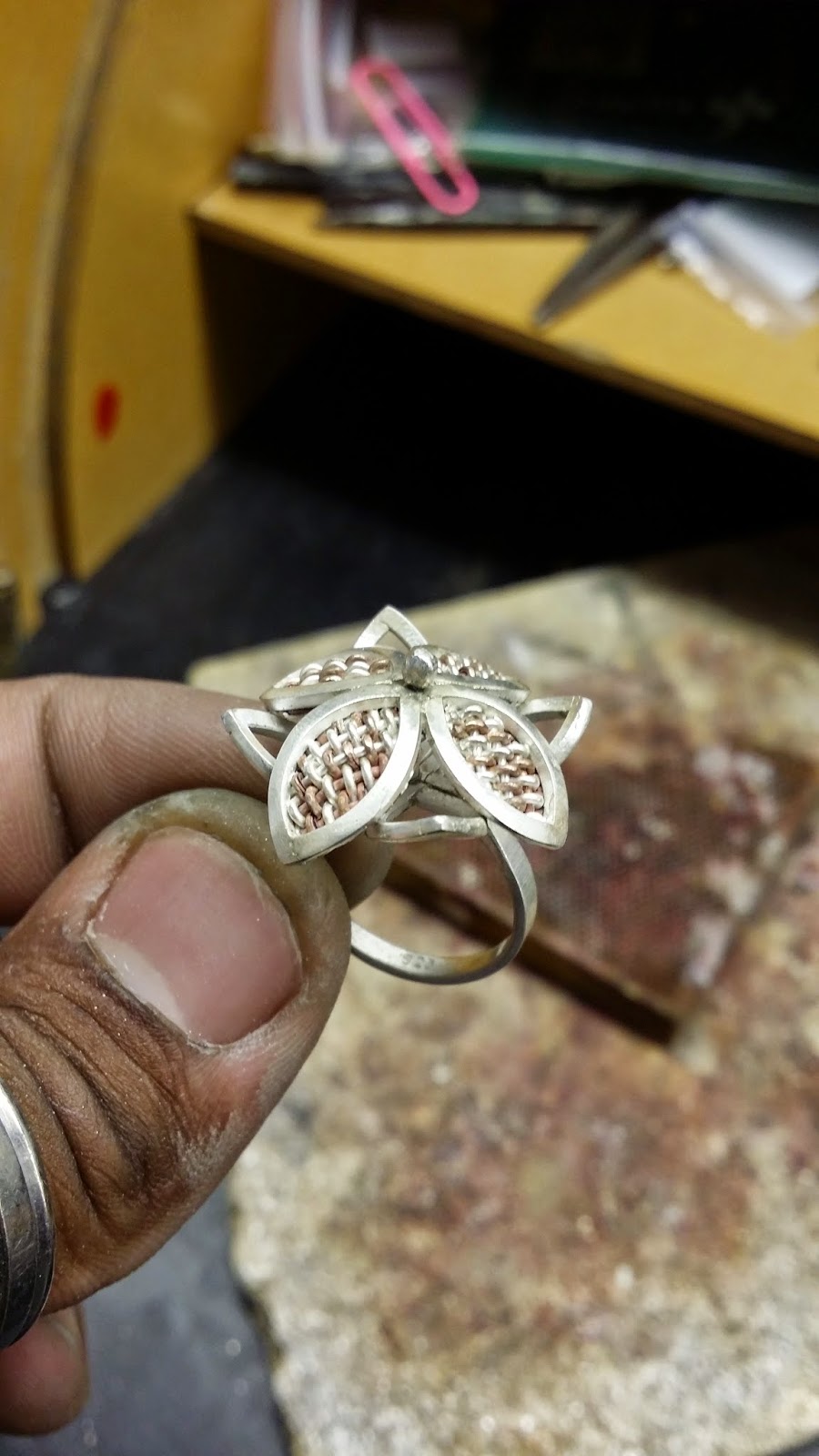 The final ring after soldering the shank. 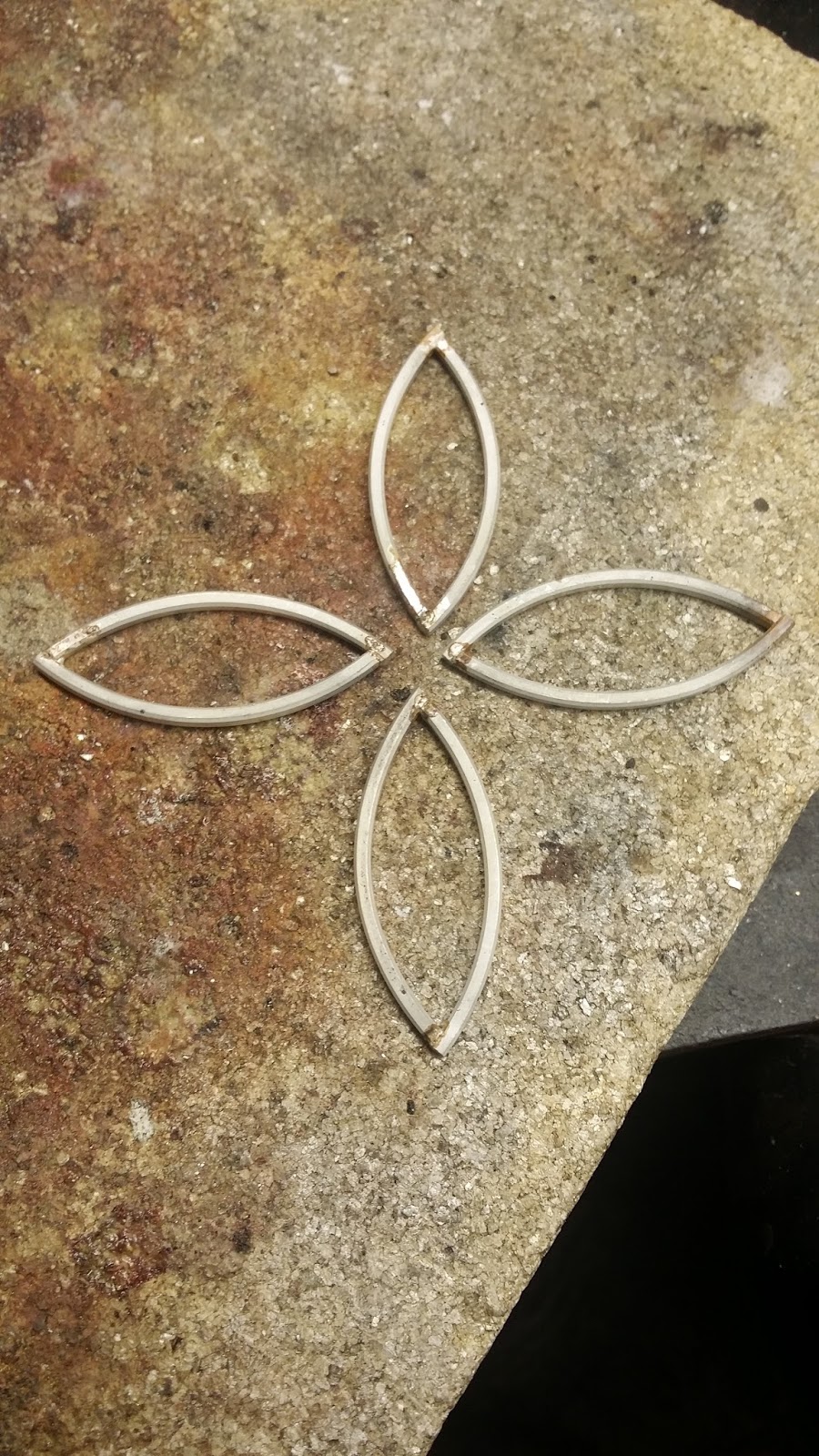 The frame of the stand petals are made of 1.5mm thick square silver wire, as was the case with the ring petals I made earlier. The four petals are soldered together at the ends. 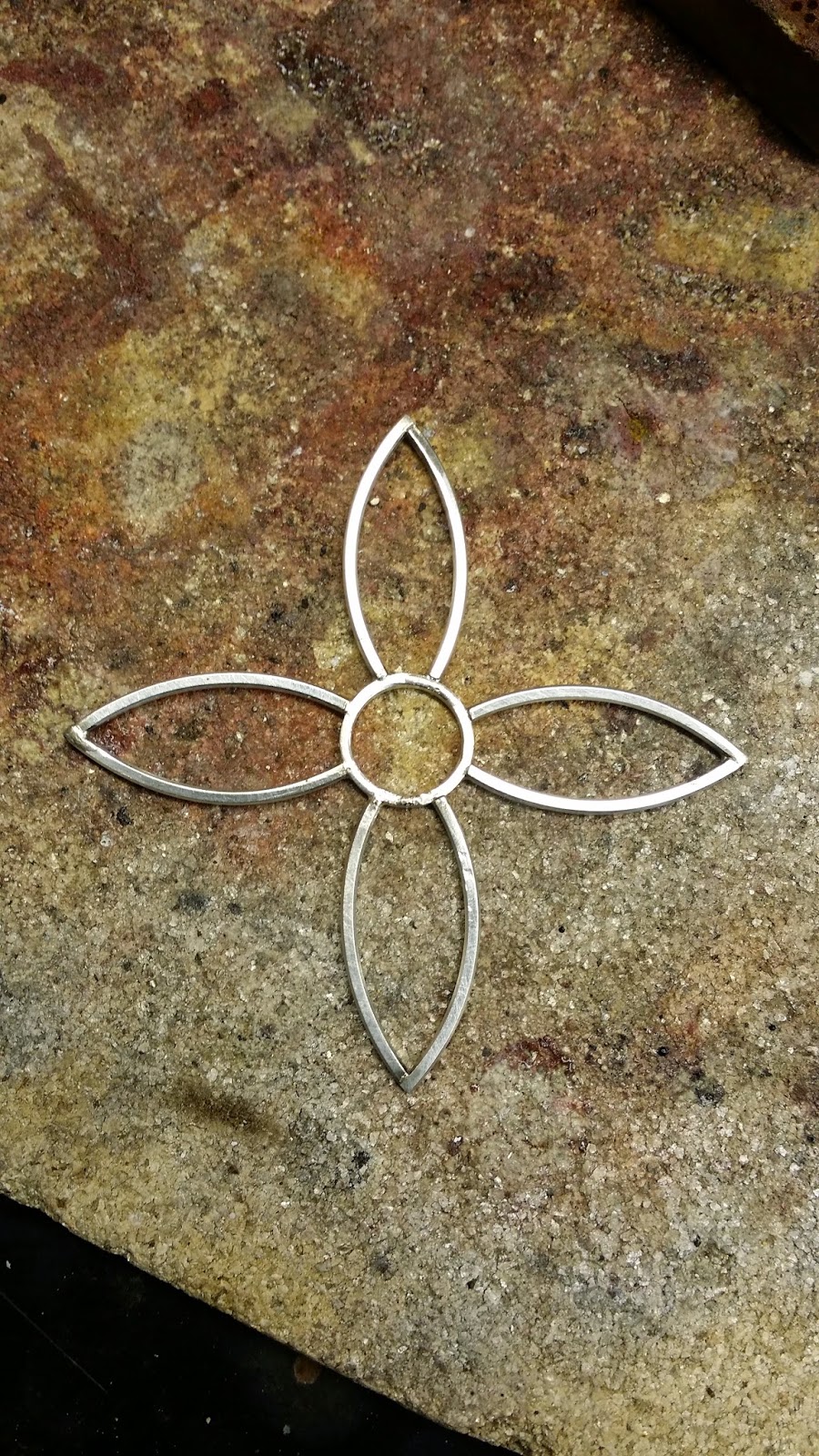 I made a ring and then I soldered the four petals equally around it. The ring in the middle is the base of the stand. 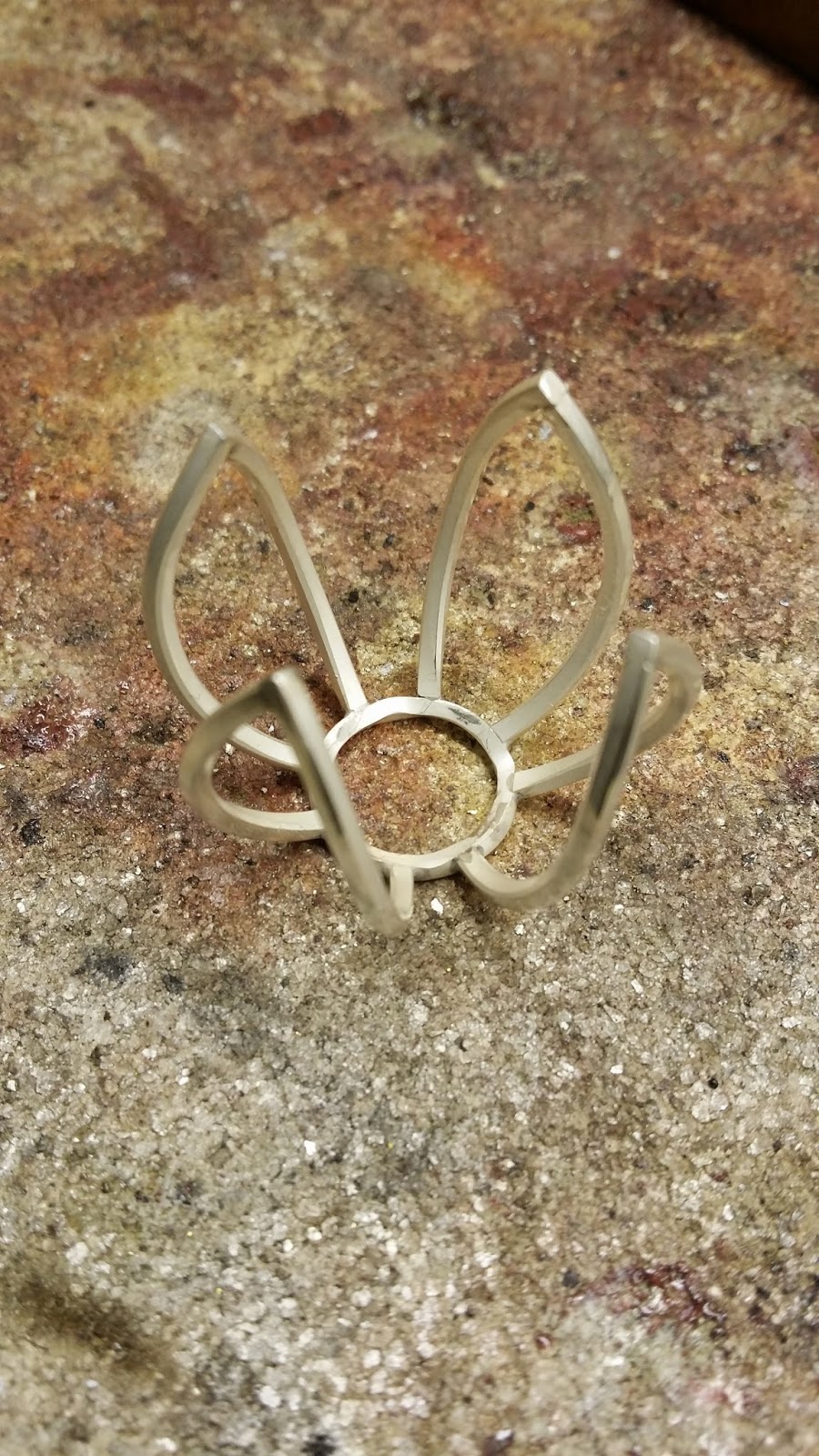 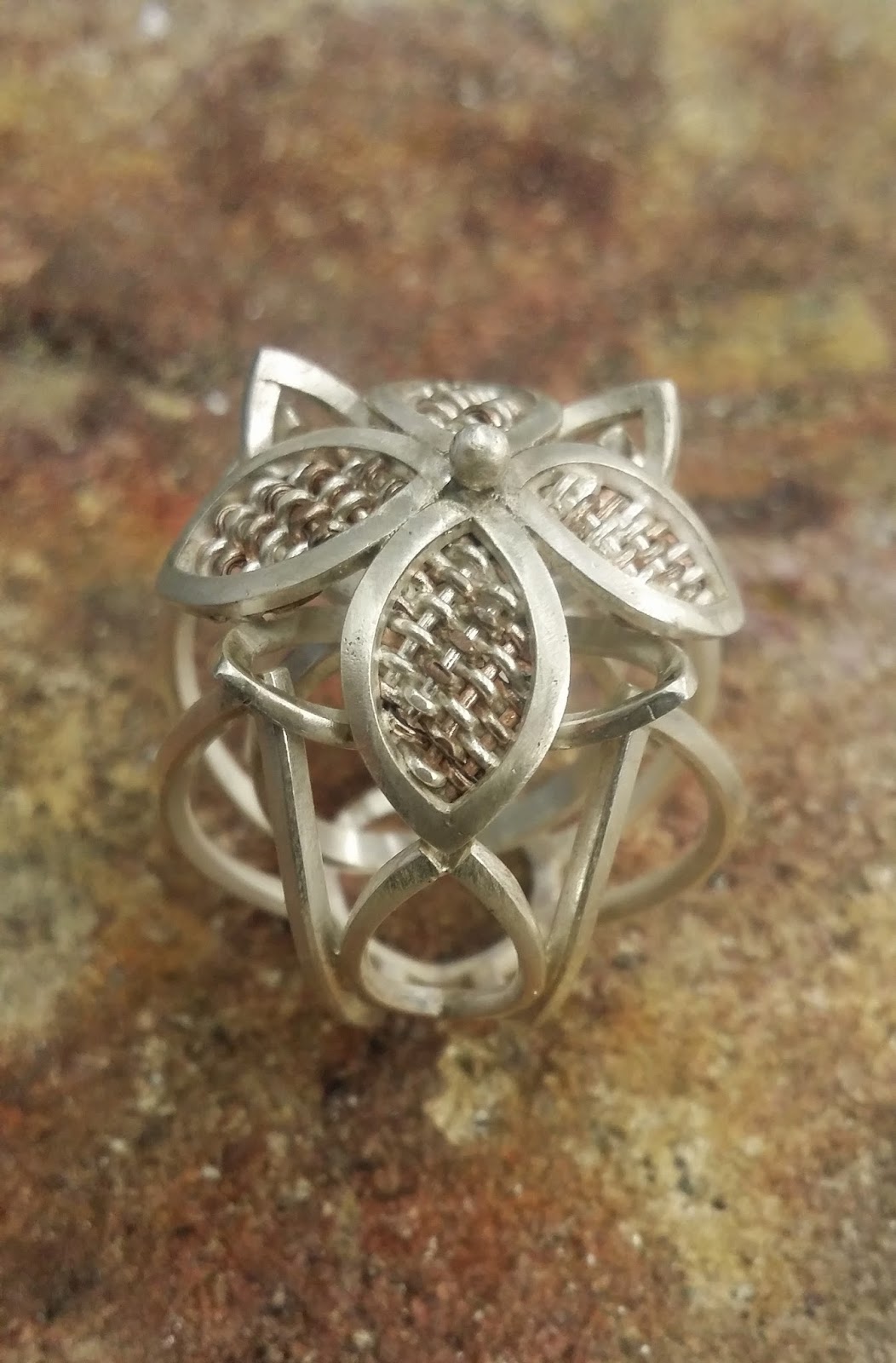 Top view of the final ring and stand when they are positioned in place. 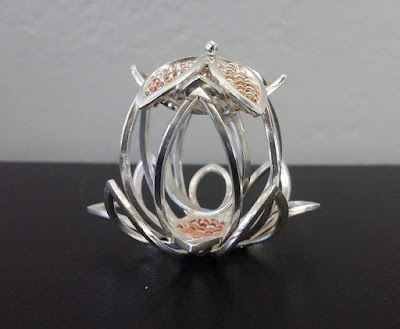 Side view of the final ring and stand when they are positioned in place.
The purpose of my work is to create jewellery that can assume the role of personal adornment when on the body as well as a visual artefact when it off the body (Quickenden 2000:1). 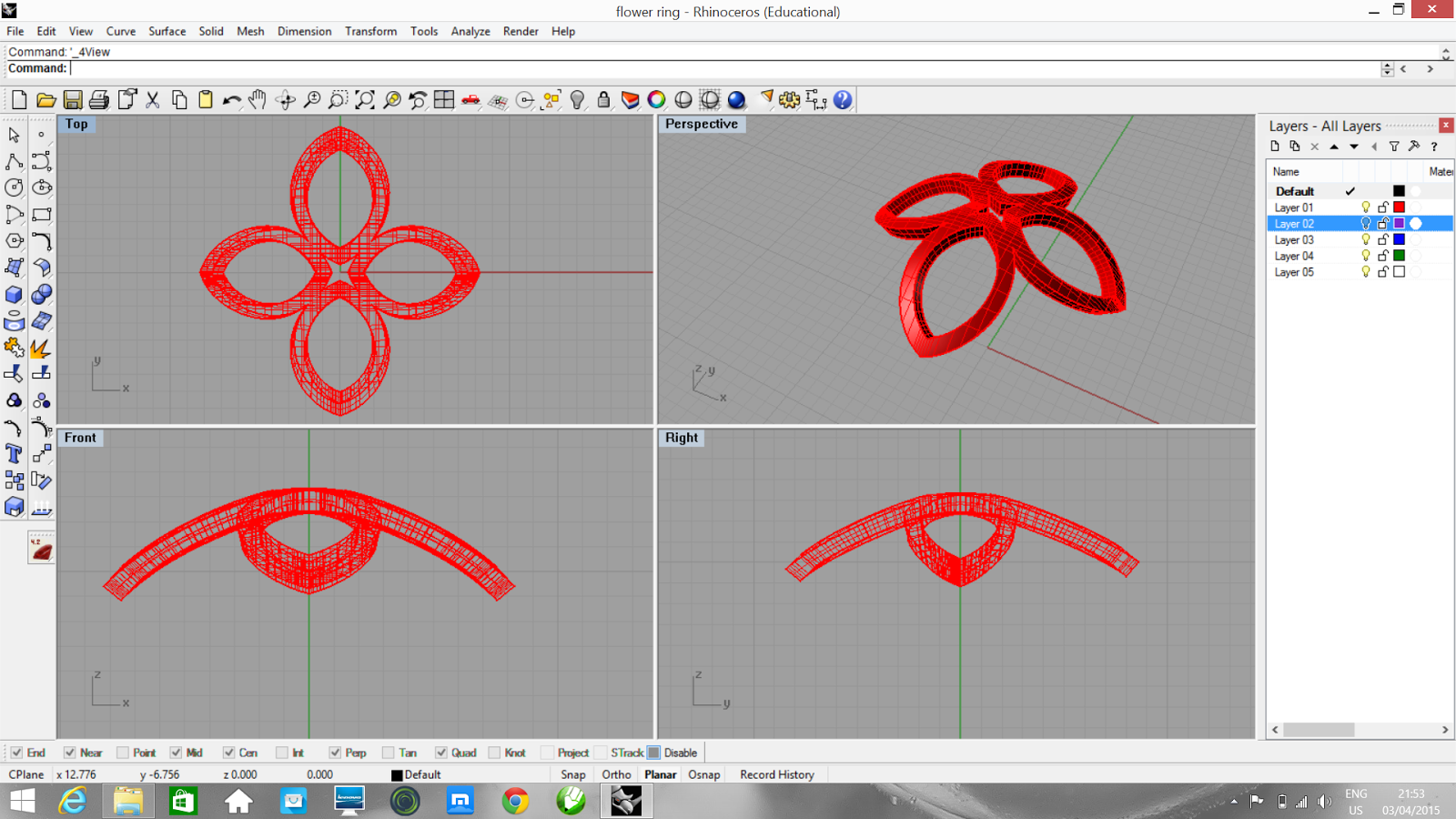 I drew the petals using curves. I then extruded the curves to create what's pictured above. Each petal was bent to resemble what it would look like in person. 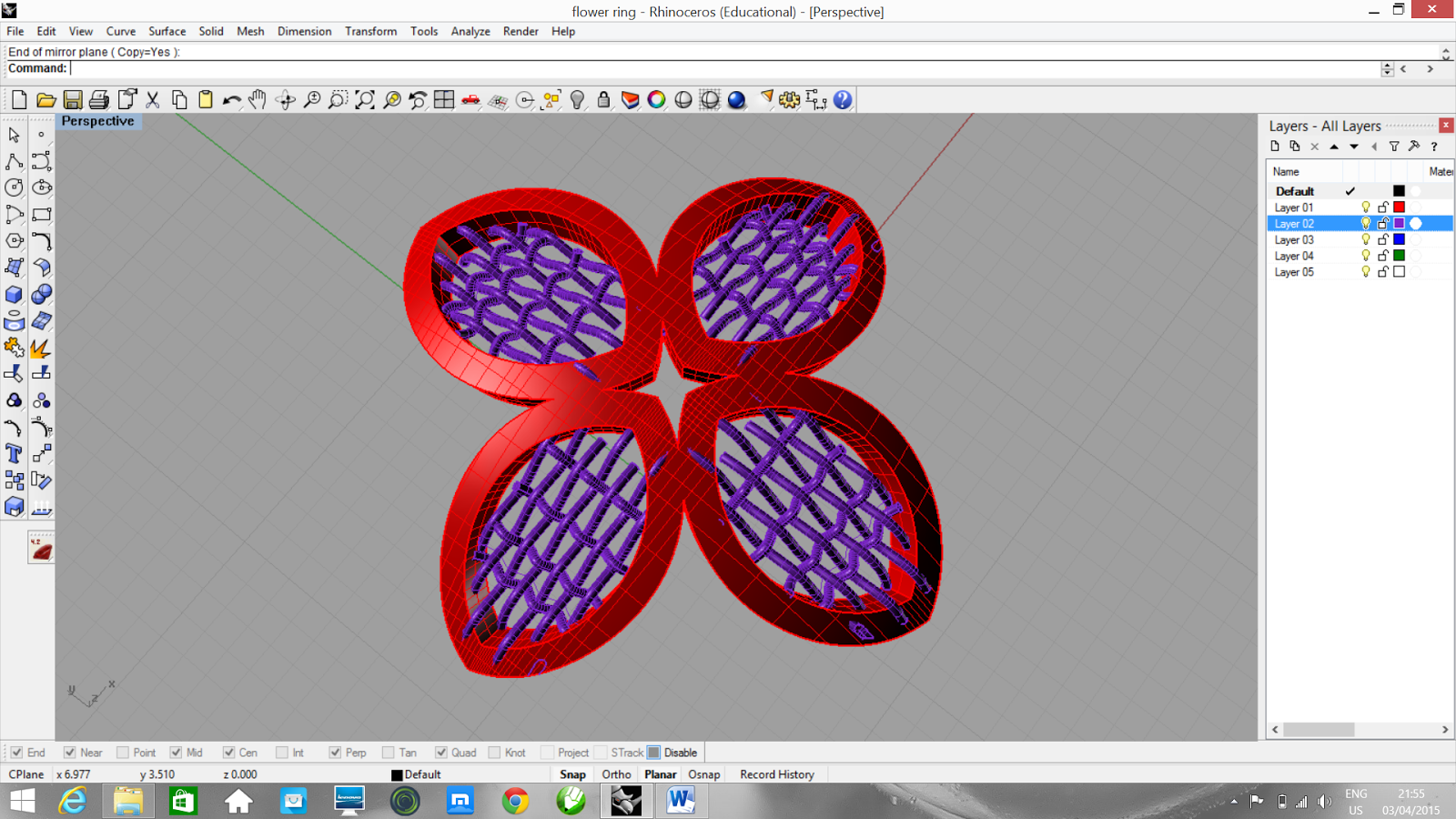 I drew the weaving using the interpolate curves and I solidified them using the pipe tool. I repeated this and arranged the piped wires as they would be if they were woven. 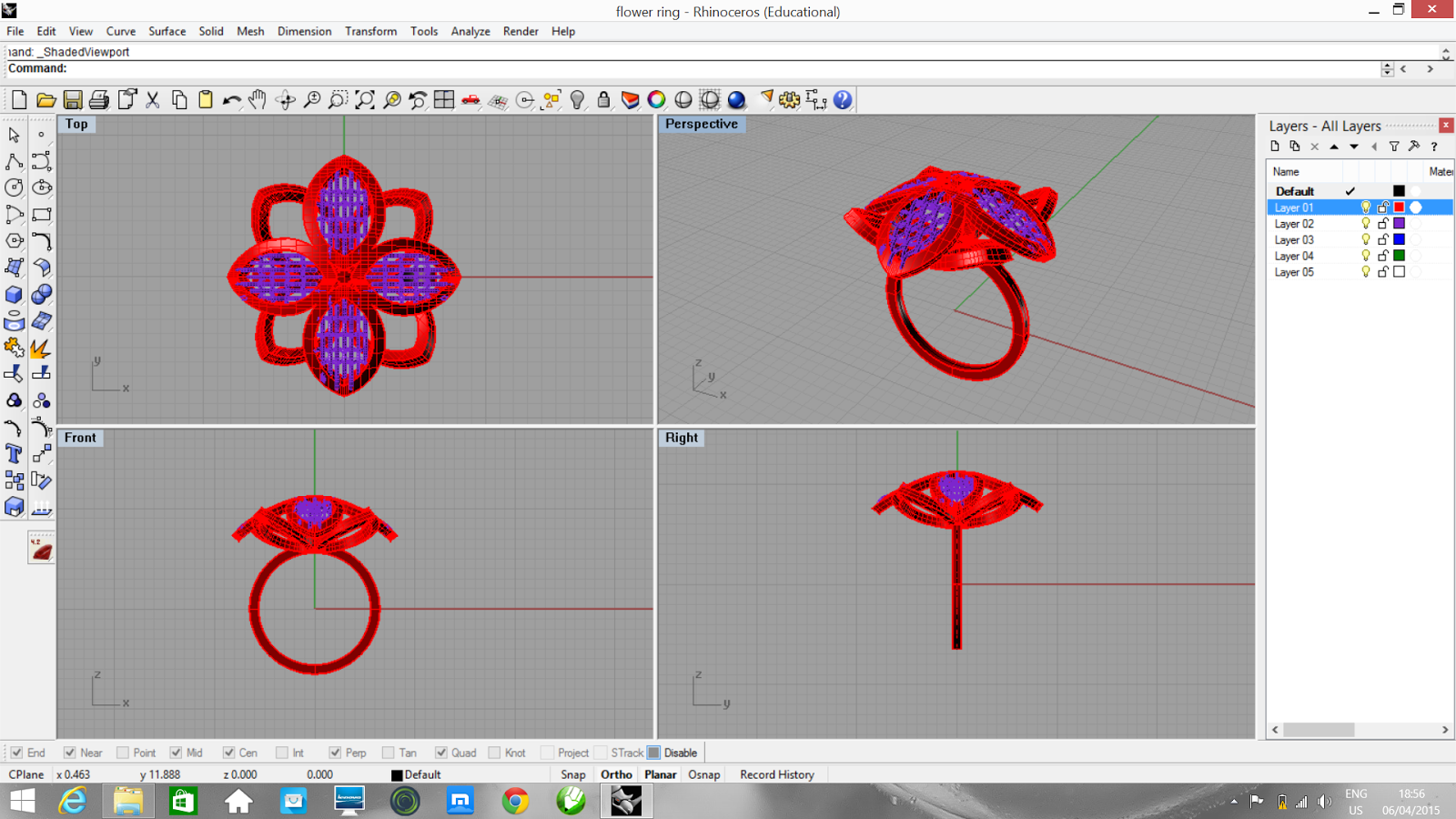 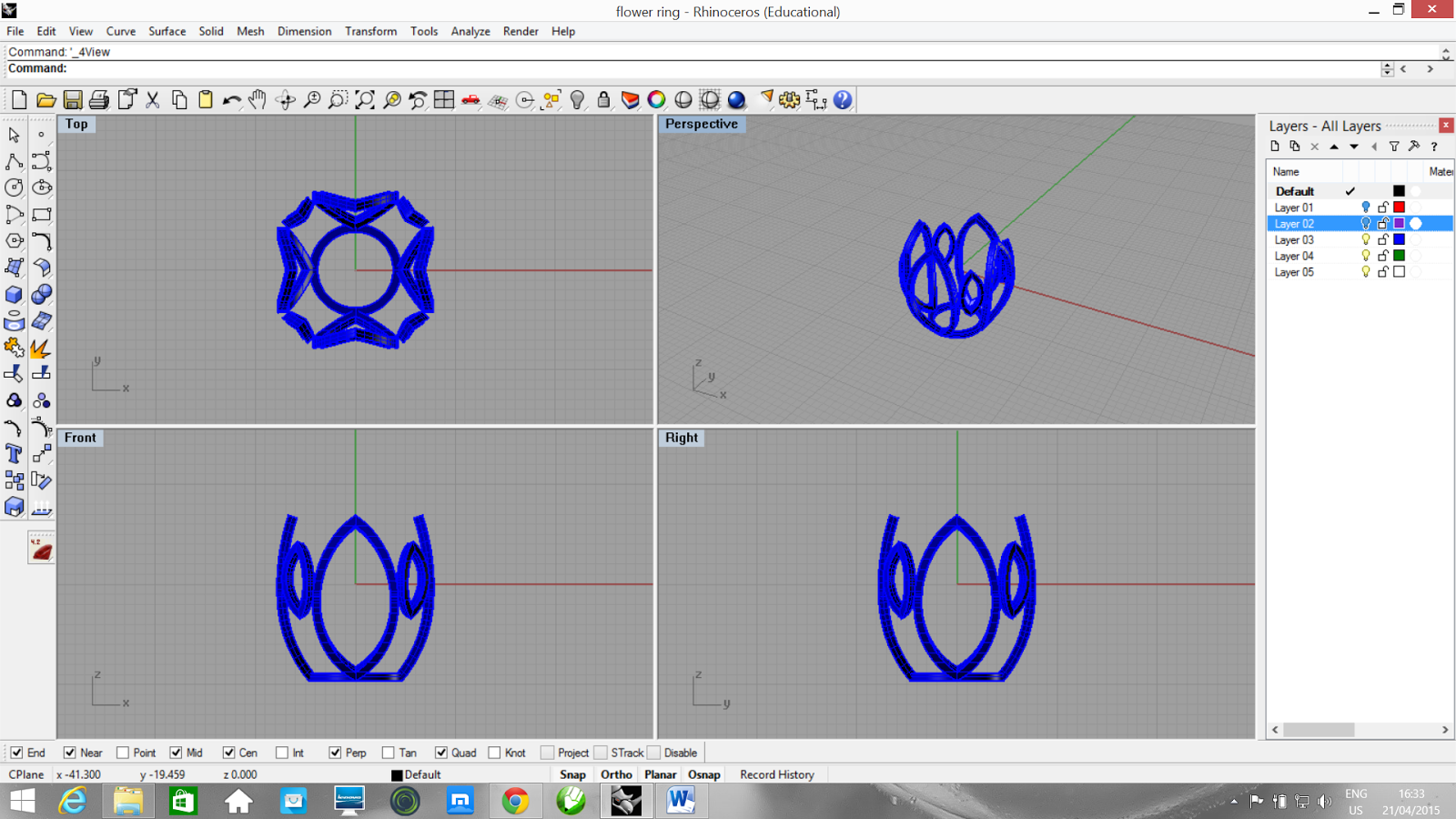 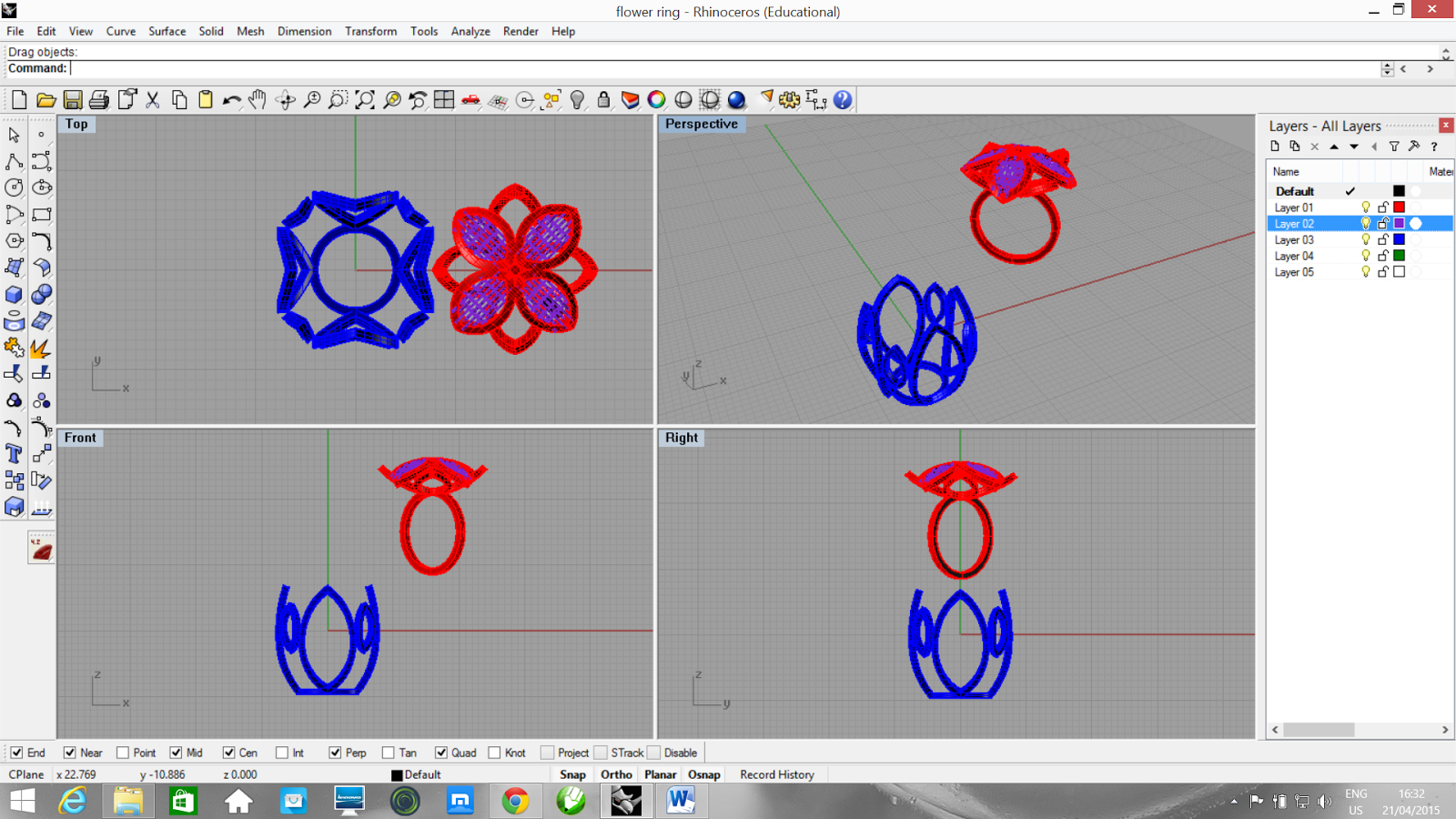 Pictured above is the ring and the stand separately. 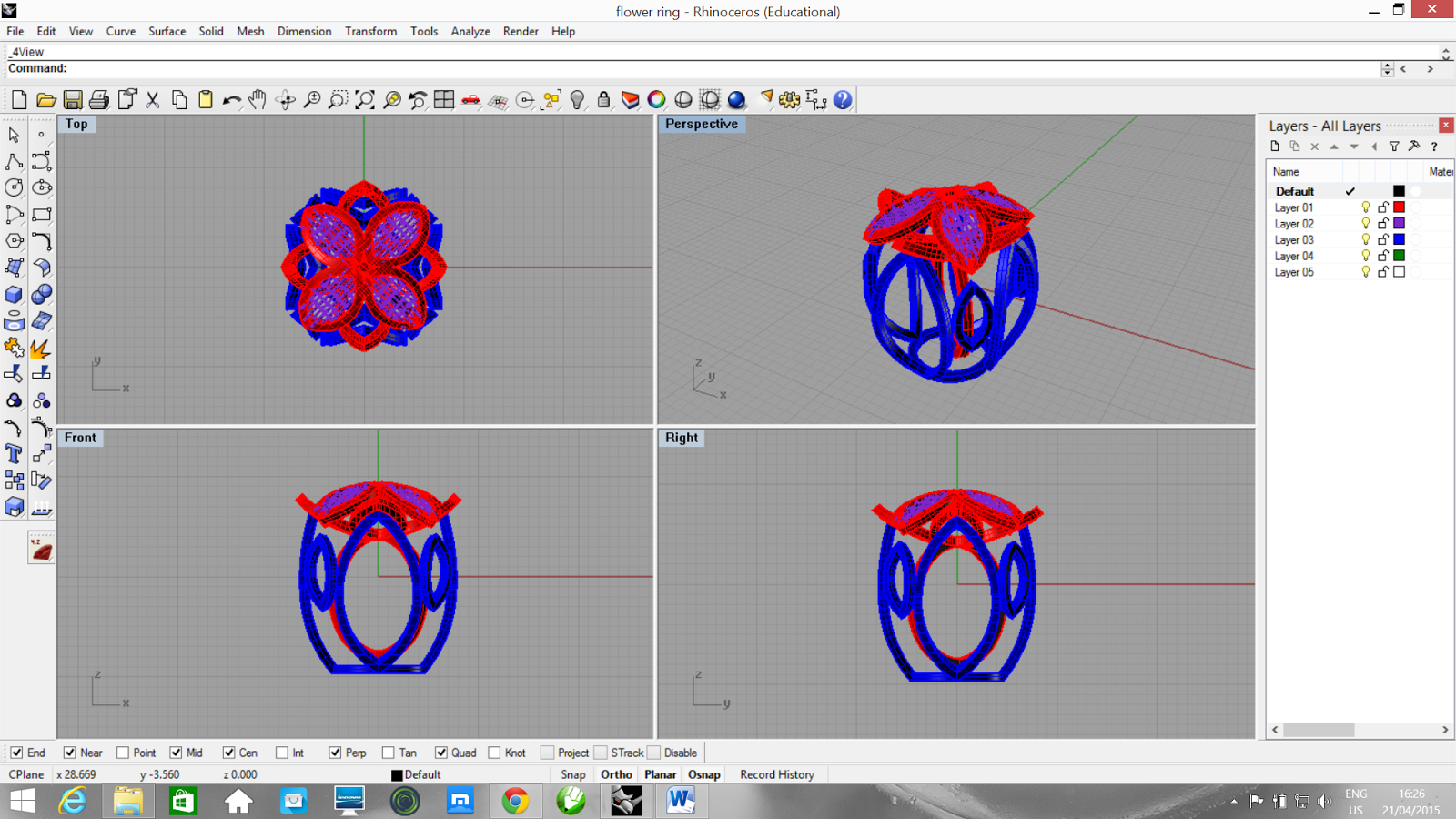