In an attempt to take my manufacturing to a new level, I have attempted to make a piece that incorporates weaving directly onto metal as opposed to soldering the weaving onto it.
As I have illustrated in my previous post, it has worked out quite well so I am moving forward with it.

During my research to find a plant to use as inspiration I found the plumeria acutiflora not knowing it was also known as the frangipani. The reason why I am mentioning this is because a classmate of mine used the frangipani as her inspiration for one of her earlier pieces. The plants looked similar but I didn't assume they were the same thing. 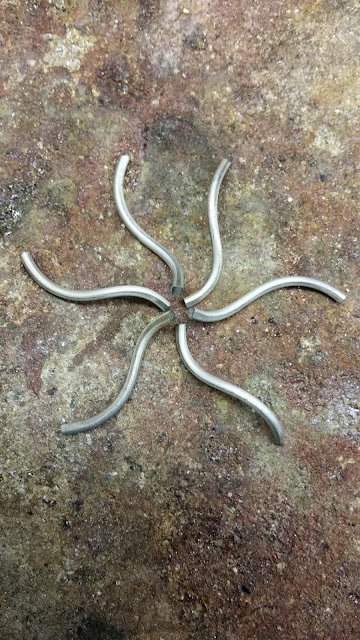 I drew 6, 2mm thick wires which I bent into "S" shapes. Each of these was shaped in the doming block to give them some dimension. I arranged them in a circle (pictured above) because this was the initial idea I had in mind for the final piece. 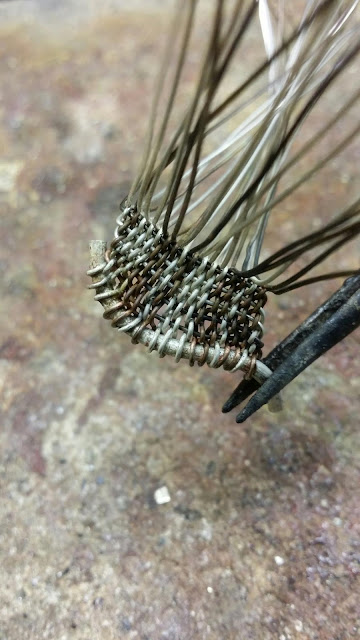 I wove directly onto each of the wires to create the pattern pictured above. I used a combination of copper and silver wire to create a visual interest. 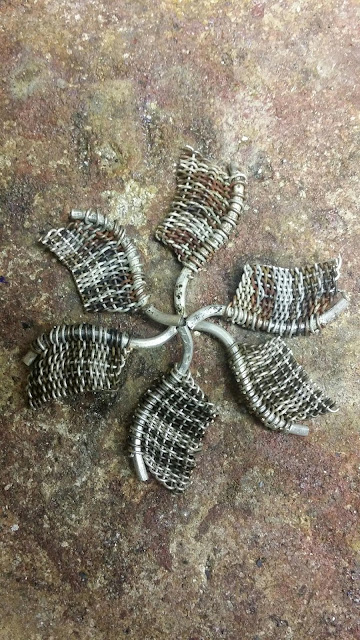 The components look like this after I have completed the weaving. I arranged them in a way I thought would look interesting as a completed piece. 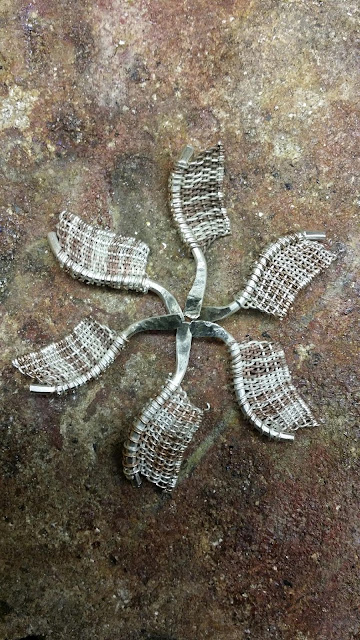 I hammered the ends of each component so that I could have a bigger surface area to drill into for riveting purposes. 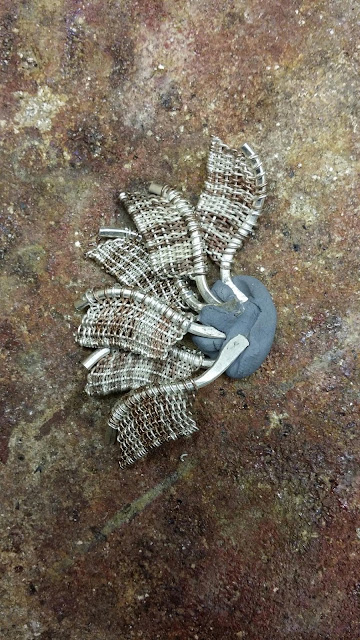 After consulting with a class mate and later, my supervisor, I decided on changing the arrangement of the components, as pictured above. 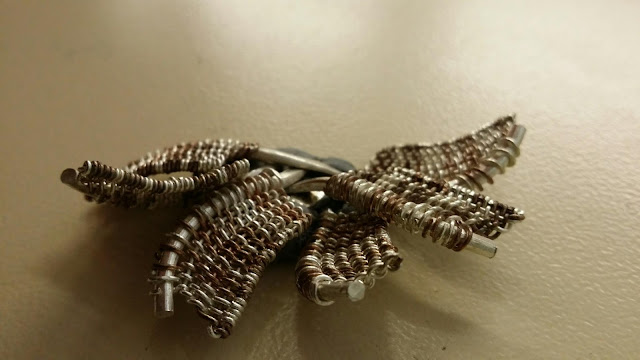 This new arrangement allowed for more interesting layering to be possible, as pictured above. 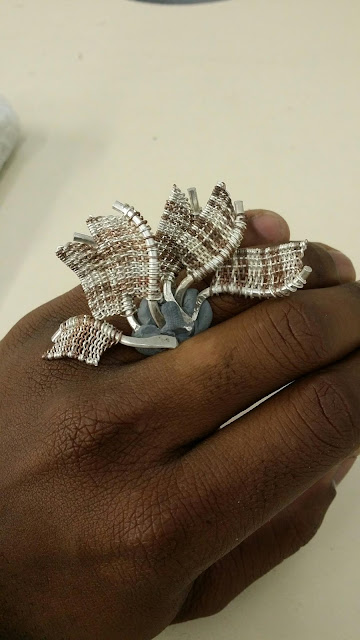 With this new arrangement I thought it could work as a ring. 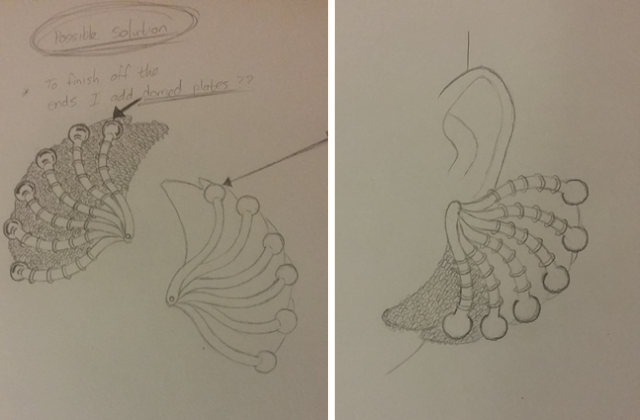 The illustration above shows the arrangement as a pair of earrings. 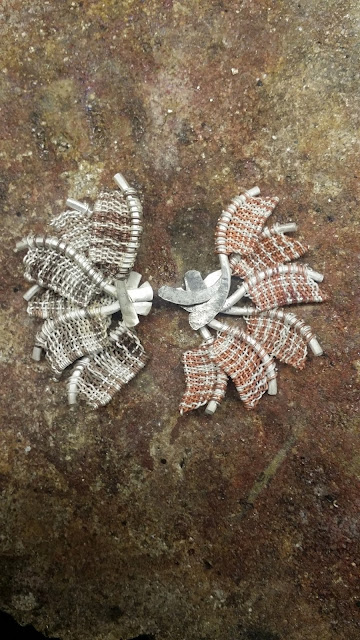 I made a matching set of components which gave me the option of making the pair of earrings or I could arrange them to make a really elaborate ring. 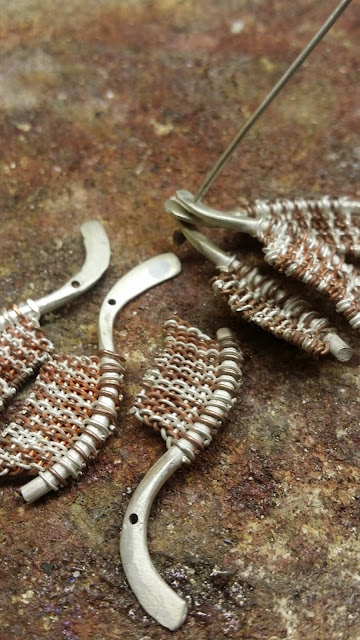 I drilled the ends of each component and arranged them on top of one another, using wire as the stabilizer and the rivet. 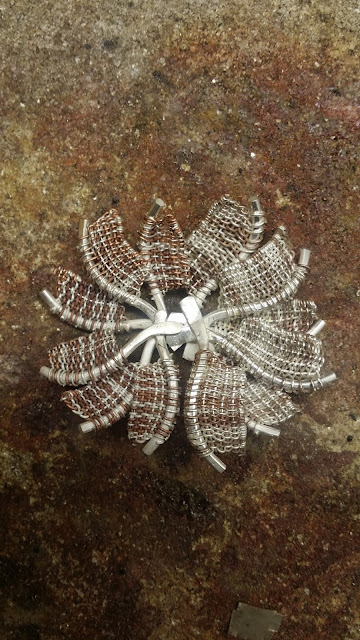 This is what the riveted components looked like eventually. 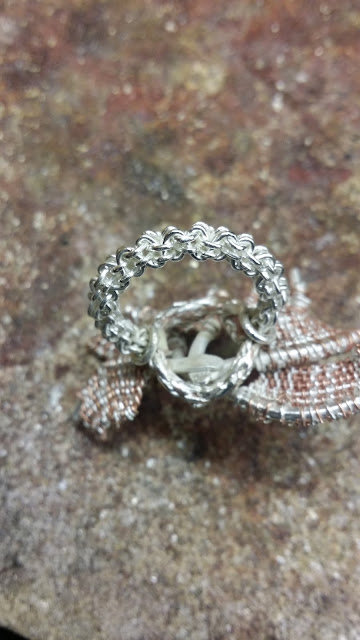 After lengthy discussions with colleagues and my supervisor I decided on the ring option because I have a ring and stand theme going from the first semester and I want to continue with it. with that said, I made a woven, silver shank to be attached to the piece. 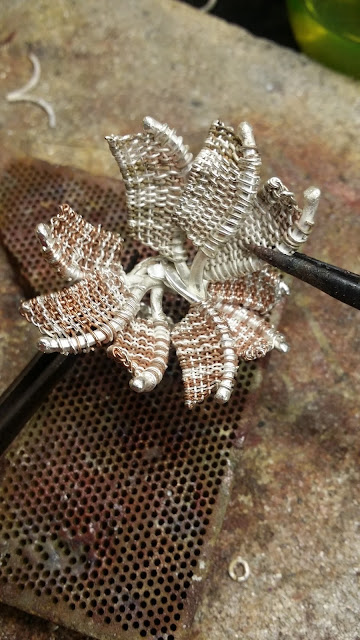 I attached the sets of components (6 riveted) separately so that I could see how I can arrange them properly. 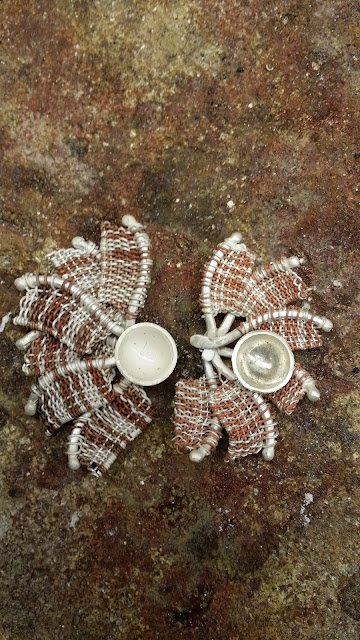 Eventually I decided against the ring concepts because I felt the woven shank was making the entire piece look busy and not as organic as I had imagined it. I decided to convert the ring into a pair of earrings. 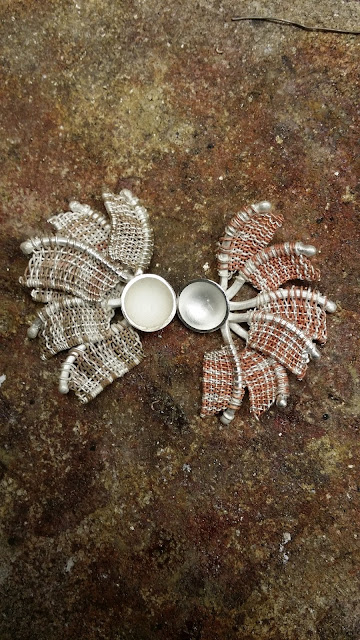 I made a pair of domes which I added to the centre of the earrings. Seeing that the inspiration of the piece was the Plumeria Acutiflora, which is a flower, I thought of the domes as the flower's buds. 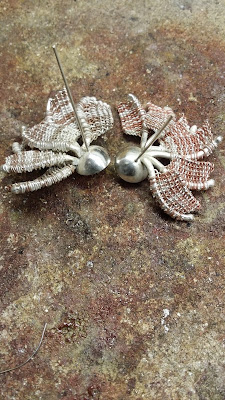 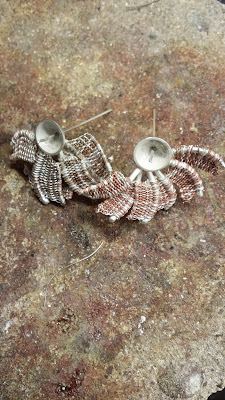 I added the pins in the centre of the domes with extra wire protruding out. I had plans of using the protruding wire as a base for a decorative feature ( refer to the image below) 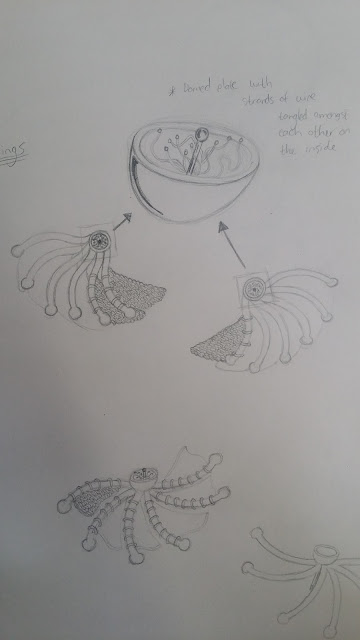 The idea was to add very thin wire around the protruding wire. These thinner wires would represent the veins one would find on plants. The other idea was to add a pearl in the dome. 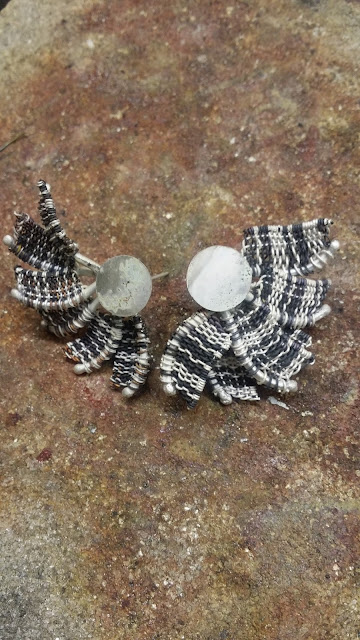 Ultimately I decided to simply cap the domes. This decision came after a discussion I had with my supervisor and we agreed that adding more decorative features on the piece would again make the piece too busy. The idea was to high polish the caps, this will give a great contrast between the busy weaving and the simple capped domes. 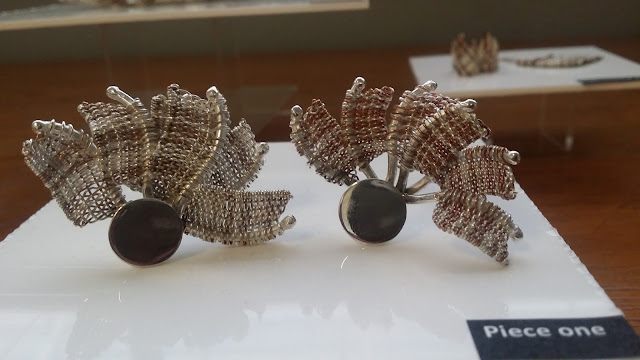 In as much as the piece can be worn on the body as personal adornment, I feel it can also be seen as a visual artefact because when the earrings are placed together with the domes placed next to one another, they look like the plumeria acutiflora (frangipani) 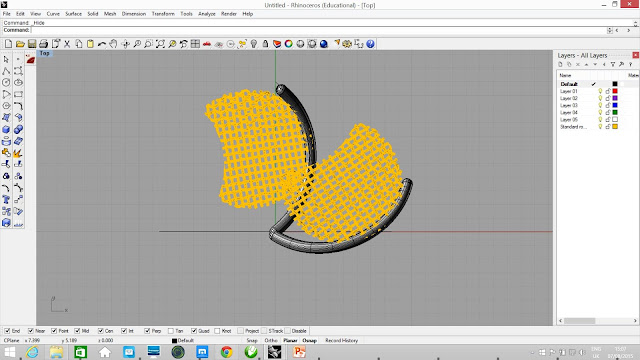 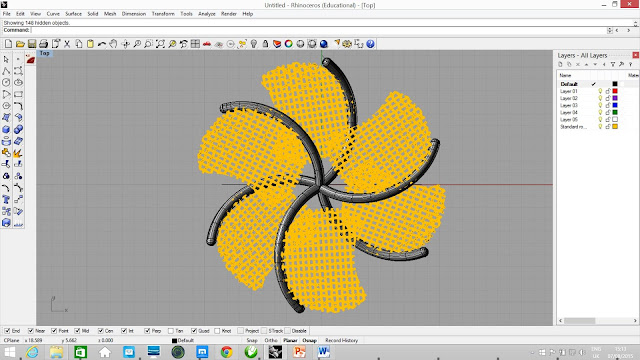 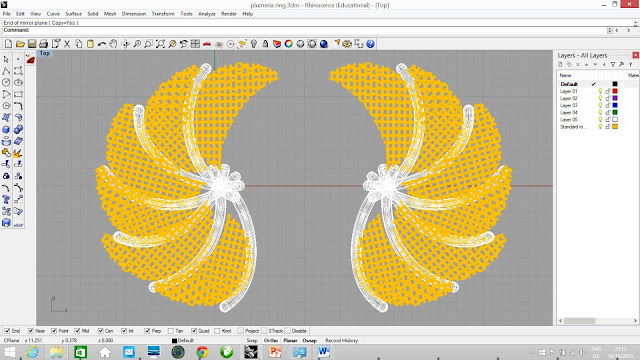 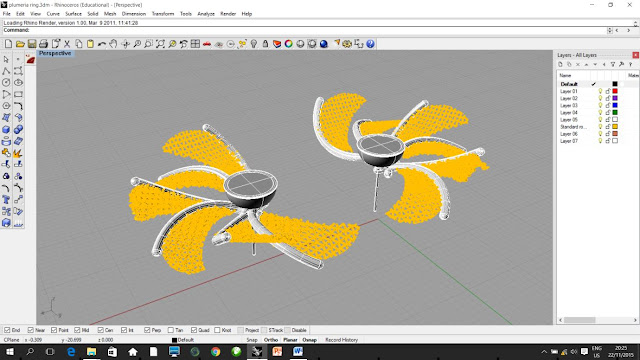 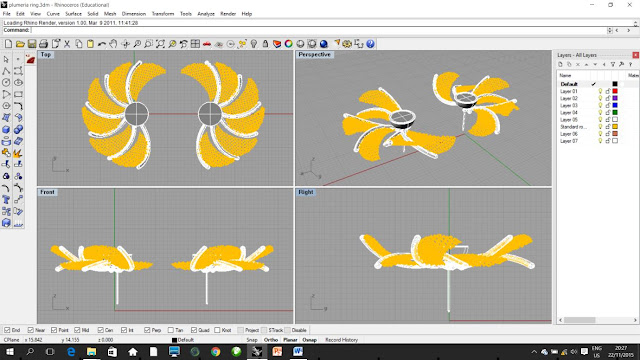